The ‘Lighthouse Projects’ are in the clinical disciplines of the chronic diseases Epilepsy, Haemophilia and Bipolar Disorder. 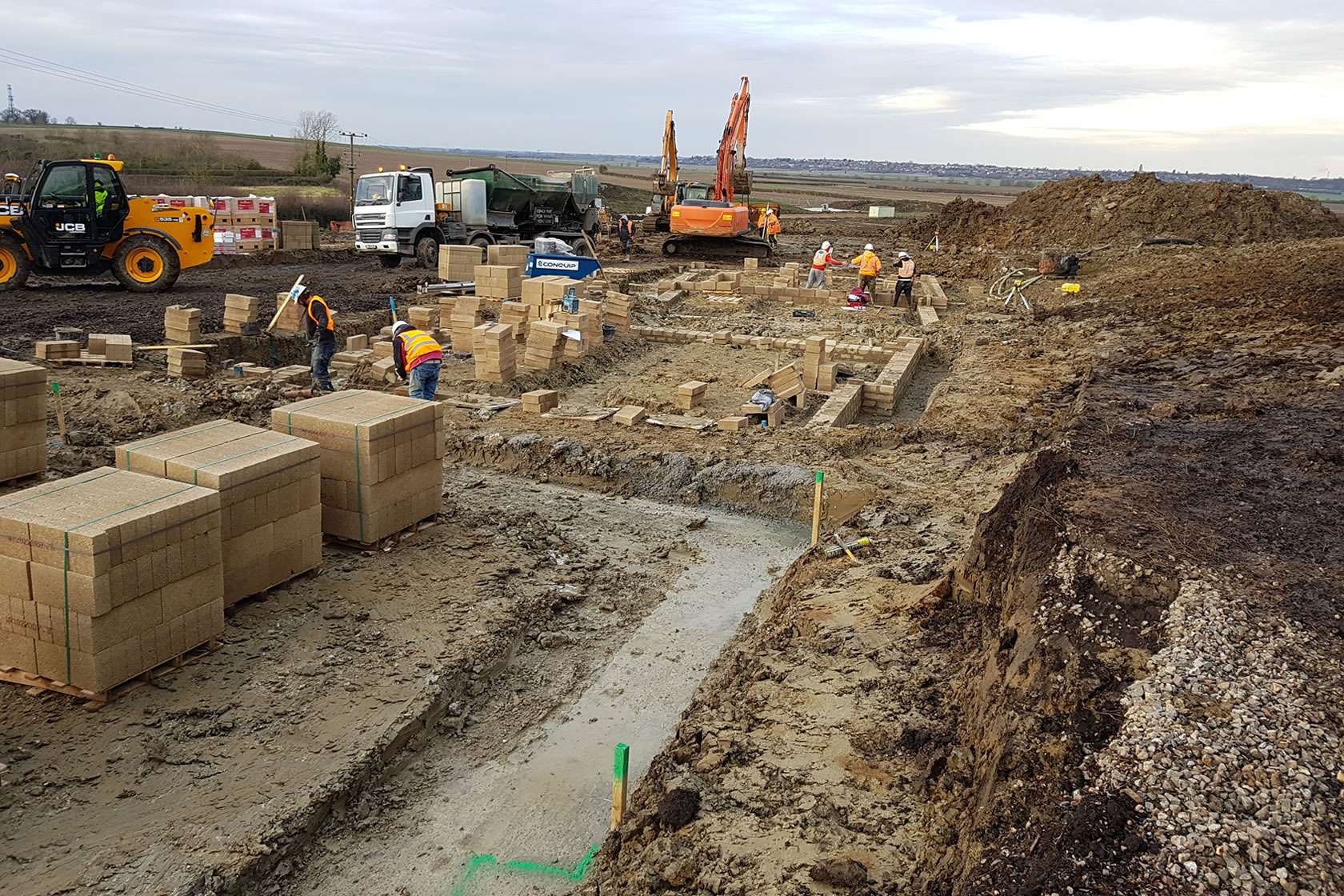 Our partnership with the Haddenham Community Land Trust (HCLT) is gaining pace despite wintery conditions and strong winds. The site, off West End on rural land at the Aldreth end of Haddenham is starting to shape up now that ground works are well underway ready for the first bricks to be laid later this month.

Nestled amidst rich green pasture, age-worn Fenland droves and pretty East Cambridgeshire villages, much of Haddenham enjoys an elevated position atop a highest ridge, with the historic Cathedral city of Ely to the west. Dating back at least 6,000 years to Neolithic times, the land on which Haddenham was founded is a treasure-trove of fascinating ancient relics. Excavations 1983 unearthed a Roman-Celtic shrine, believed to have been displaced by Saxon raids in the third century. An ancient 26ft canoe, hollowed from the single tree and discovered at Fen Gault in 1841, provides further evidence of Saxon-era cultures. In 2019, archaeological digs revealed a number of fascinating artefacts relating to a 1st century AD Romano-British farmstead, formed by a series of enclosures and bound by ditches. Forming part of the old Aldreth Causeway into the Isle of Ely, Haddenham witnessed the Roman incursion of the Isle and the later visit by William the Conqueror to the monks of Ely.  Indeed Haddenham played a fundamental role in the founding of a monastery in Ely, the early beginnings of what became Ely Cathedral, a resplendent architectural triumph in glorious Romanesque style.

Today the charming village Haddenham is home to around 3,000 residents who enjoy excellent road links to Ely and beyond. A regular Ely Zipper bus timetable connects Haddenham to Ely and surrounding villages, with the punting scene, restaurants and cafes of Cambridge, together with its magnificent array of High Street stores, supermarkets, cinemas and visitor attractions, just 15 miles away via the A10. Huntington, with its links to the A1 and frequent trains into London Kings Cross is a 35-minute drive on the A1123. Historic Haddenham retains plenty of mementoes of its storied past, with the quaint characterful local pub the Red Lion at the community’s heart. A distinctive centuries-old black-and-white timber-and-tile building, this 17th century coaching inn retains its rustic framework with plenty of exposed old beams, cosy areas, a welcoming kitchen serving award-winning food and a stunning inglenook fireplace. Mesmerising countryside views encompass acres of rolling fields once sown by horse-drawn plough with The Great Mill of Haddenham a rare example of a four-storey stone Cambridgeshire tower windmill, dating back to 1803. Village amenities include several local shops, a GP surgery, a Baptist church, Methodist Church and 14th-cenury Anglican Parish church, pre-schools, Primary School, a well-attended bowling club and a picturesque village green. Haddenham also has a library, arts projects, cricket team, a recreation ground and active Sports & Social Club. Much anticipated annual events include the ever-popular Haddenham Beer Festival and Haddenham Steam Rally, which both draw visitors from miles around. The village is looped by several leafy public footpaths and bridalways, ensuring pleasant year-round hikes and walks along well-maintained bird-filled trails dotted with fragrant wildflowers. The Haddenham Conservation Society has a scenic Wildlife Garden, created to attract butterflies and pollinating insects. It also organises tree-planting, wildlife walks and woodland conservation projects – with family activities once spring arrives!